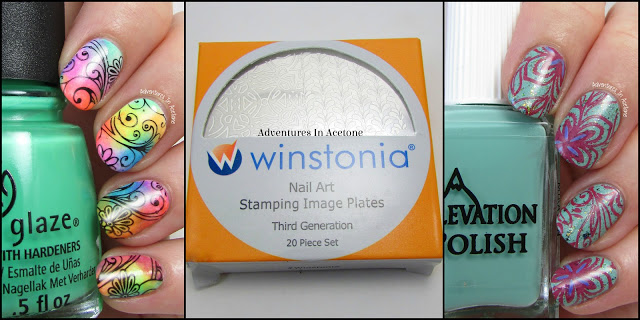 Press Sample
Good afternoon, readers! It’s been quiet around here on Adventures In Acetone lately, have you noticed? School is out for the summer AND my little Owen (almost 3 years old) has had a stomach bug for a few days. However, he is feeling a little better today so I have some time to share the newest set of stamping plates from Winstonia. There are 20 plates and most of them are full plate designs where there aren’t spaces between the images. Let’s take a closer look below at each plate, plus a couple of manis I’ve worn since the plates arrived at my house.

Before I show you the plates, I wanted to touch base on a few things in general with the set. As you can see below, the 20 plate set comes in this little box. My other stamp plates are just thrown into a basket in my storage so having these in a box was really helpful.

Each stamp plate comes with a blue protective film over the images. Before use, peel it up and discard. Also, they all have a permanent paper backing and smooth edges.

The plates are etched very well and I didn’t notice any issues with use. They are 2.7 inches in diameter and as you will notice, they aren’t the typical rectangular full nail images. Most take up 1/4 of the circle allowing for use with wider and longer nail beds, as well as the option to turn and reposition the image from nail to nail.

Time for a closer look at each plate!

There are tons of different images to play around with in this set, I’ve only begun to try them out. Below are some manis using these Winstonia Third Generation Stamping Plates.

I loved the swirly floral image from plate W311 and was inspired to use it in the mani below.

The large flower image from plate W312 also called my name as soon as I opened the box. I turned the stamper before applying it to each nail so they aren’t all the same.

What are your thoughts on these Winstonia Third Generation Stamping Image Plates? I am really happy with their quality and variety of images. I’m sure there will be many posts to come using these in the future.
The Winstonia Third Generation Stamping Image Plates Set retails for $15.95 at the shop below.
I also have a special 10% OFF COUPON CODE for my readers! Enter ACETONE during checkout. (Expires on July 31st, 2015)
Thank you so much for reading!
Winstonia Store Links
Website/shop: http://winstonia.com
Facebook: https://www.facebook.com/WinstoniaStore
Twitter: https://twitter.com/winstonia_store
*The products in this post were sent for me to review with my honest opinion.