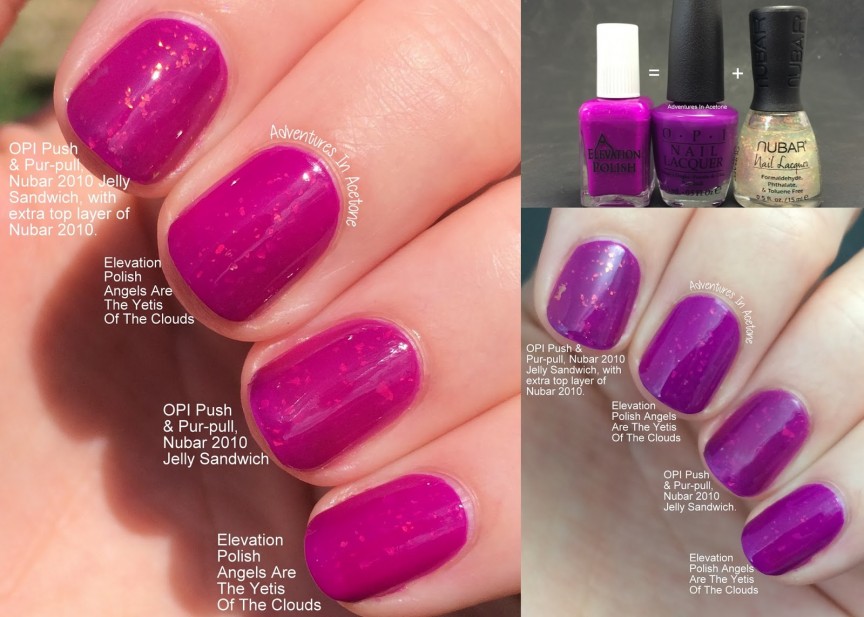 Good morning, readers! I have exciting news to share with you! I’ve done some comparisons and layering experiments and I’ve figured out a DIY dupe for recreating a similar look to the very limited edition Elevation Polish Angels Are The Yetis Of The Clouds!! I know it’s not the same as owning this gorgeous polish, but its a bit of a consolation prize if you can create a close enough look, right? Continue reading to see how I did it, and how it compared to some other polishes in my stash!

To begin, let’s take a look at this comparison against three similar colors in my stash. At first glance of bottles, I was feeling pretty confident that Color Club Right On would be the closest.

Color Club Right On, Elevation Polish Angels Are The Yetis Of The Clouds, OPI Push & Pur-pull, China Glaze Flying Dragon.
But, on the nail it’s a completely different story! The Color Club was the least similar to Angels! Must be the neon formula? I was shocked! But, I was also surprised at how similar OPI Push & Pur-pull looked on the nail because the bottles were very different. Sneaky nail polish!
(The China Glaze was also similar, but since it has glitter, it wasn’t going to work for this layering.)

The OPI is a jelly formula (needing three coats for the picture above) but it’s missing the color shifting flakes that Angels has. I just so happened to have Nubar 2010 sitting in a drawer and I figured out a way to get really close to the true look of Angels Are The Yetis Of The Clouds by layering them!

I’ve labeled the photos below for you, but I’ll explain here in more detail at what you are looking at:

Because Angels is such a color changer depending on the lighting, I’ve shown these combos in both direct sunlight, and then in the lightbox but with much less light than usual to show the darkest version.

What do you think? The OPI and Nubar sandwich isn’t perfectly the same, it’s missing a tad bit of brightness and it’s a bit less opaque. But, it’s pretty darn close if you are wishing you had this fun polish. It’s more coats, of course, so it’s all up to you if you want to recreate it.
Let me know what you think? Will you try it? Thanks so much for reading!