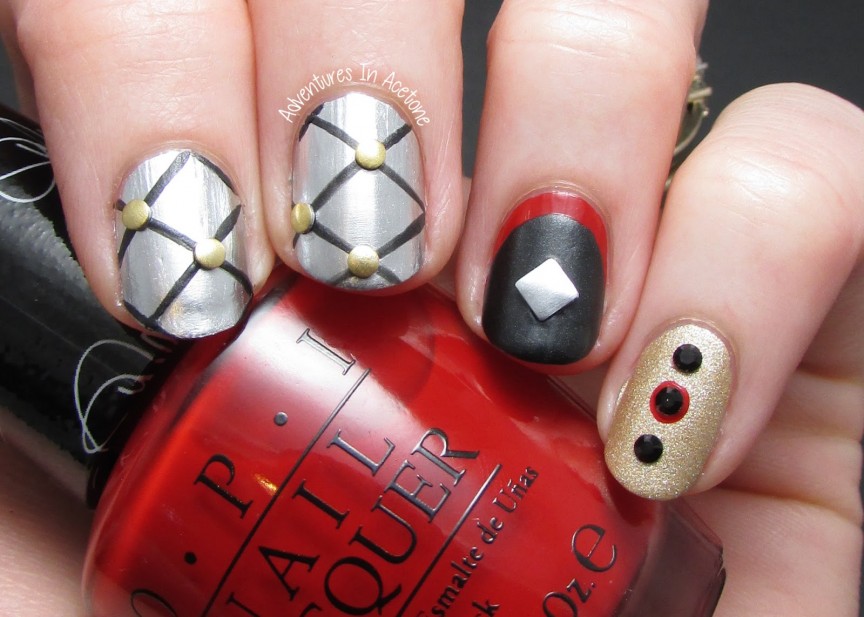 Press Sample
Good morning, readers! You voted on my Facebook page, so today’s post is a fun nail art skittlette look that I created using 4 of the new Gwen Stefani by OPI Collection! I’ll have a full swatch post up for you tomorrow, so this is like a sneak peek on the colors!

Gwen Stefani’s signature red, Over & Over A-Gwen, is only available in a box set and it includes nail glue, and idea pamphlet, studs, and Swarovski Elements crystals for some funky nail art. Naturally, I wanted to use those to make a fun manicure.

What do you think of this funky look? I actually LOVED it, and wore it for a night out. The studs are definitely for a one night event, unless maybe you sealed them in with top coat instead of just using nail glue like I did. I had a few missing when I woke up.
I am really excited about this Gwen Stefani by OPI Collection and I can’t wait for you to see the entire collection swatched tomorrow for Swatch Saturday– so don’t forget to come back for that! Thanks so much for reading!
Gwen Stefani by OPI nail lacquers contain no DBP, Toluene, or Formaldehyde, and feature OPI’s exclusive ProWide™ Brush for the ultimate in application. This promotion will be available beginning January 2014 at Professional Salons, including Beauty Brands, Beauty First, Chatters, Dillard’s, JCPenney, Pure Beauty, Regis, Trade Secret, and ULTA, for  $9.00 ($10.95 CAN) suggested retail for each nail lacquer. The boxed set including Over & Over A-Gwen and SWAROVSKI ELEMENTS will retail for $14.95 ($18.95 CAN).
For more information, please call 800-341-9999 or visit www.opi.com. Follow OPI on Twitter @OPI_PRODUCTS and become a Facebook fan!

ABOUT OPI
As the world leader in the professional nail care industry, OPI is committed to providing high-quality products and services to both salons and their customers, along with a focus on industry safety and innovation. Known for its exceptional formula, fashionable colors and iconic names, OPI’s heavily-pigmented lacquers are super rich, long-lasting and chip-resistant – offering an affordable luxury to consumers. OPI nail lacquer is available in over 200 shades and contains no DBP, Toluene, or Formaldehyde. Each lacquer features OPI’s exclusive ProWide™ Brush for the ultimate in application. Currently, OPI is available in over 100 countries and retails a full line of professional items, including nail treatments, finishing products, lotions, manicure/pedicure products, files, tools, gels and acrylics.
ABOUT GWEN STEFANI
A singer since childhood, Gwen has fronted the band No Doubt for the past 22 years.  During this time she has achieved worldwide success as a performer, songwriter and recording artist selling almost 50 million albums worldwide. No Doubt’s five genre-blending albums have showcased her adept songwriting and poignant lyrics with number one hits like “Don’t Speak”, “Just A Girl”, and “Hey Baby” along with many others.
After the double-platinum retrospective Singles Collection, featuring the hit “It’s My Life,” Gwen released two highly successful solo albums. Love.Angel.Music.Baby was released in 2004 and The Sweet Escape was released in 2006.  In 2009, after a nearly five-year hiatus, No Doubt completed a 50-plus city North American tour performing for more than 750,000 fans that summer. The following year they were invited to perform for President Barack Obama and first lady Michelle Obama, Oprah Winfrey, Sir Paul McCartney and others as part of the annual Kennedy Center Honors. In 2012, No Doubt released their sixth studio album “Push And Shove” which debuted #3 on the Billboard Top 200 Chart. The band is currently writing and recording new music to be released this year.
In addition to her singer-songwriter career Gwen’s original sense of style and lifelong passion for creating her own clothing designs culminated in the launch of her fashion label L.A.M.B. (Love, Angel, Music, Baby) in 2003.  Gwen is widely recognized as a trendsetter and accomplished designer within the fashion industry L.A.M.B is a luxurious collection of clothing, handbags, shoes and fragrance, based on Stefani’s personal style and aesthetic.  In 2005, Gwen launched her highly successful second brand Harajuku Lovers.  Harajuku Lovers is a playful line of apparel, bags, shoes, fragrance, stationary and electronics that reflects Gwen’s love of Japanese culture and Pop Art.  L.A.M.B. and Harajuku Lovers are sold in over 2500 retail doors worldwide. In 2011, Gwen launched Harajuku Mini exclusively for Target in all 1700+ doors.  Harajuku Mini is a designer children’s brand that includes shoes, bags, accessories, swimwear, and home.
In 2011, Gwen became actively involved in the relief and recovery effort in Japan.  In addition to donating $1,000,000 to Save The Children’s Japan Earthquake-Tsunami Children in Emergency Fund, Gwen created a charity auction and limited edition T-shirt with 100% of proceeds benefiting the relief effort.
*The polishes used in this post were sent for me to review with my honest opinion.